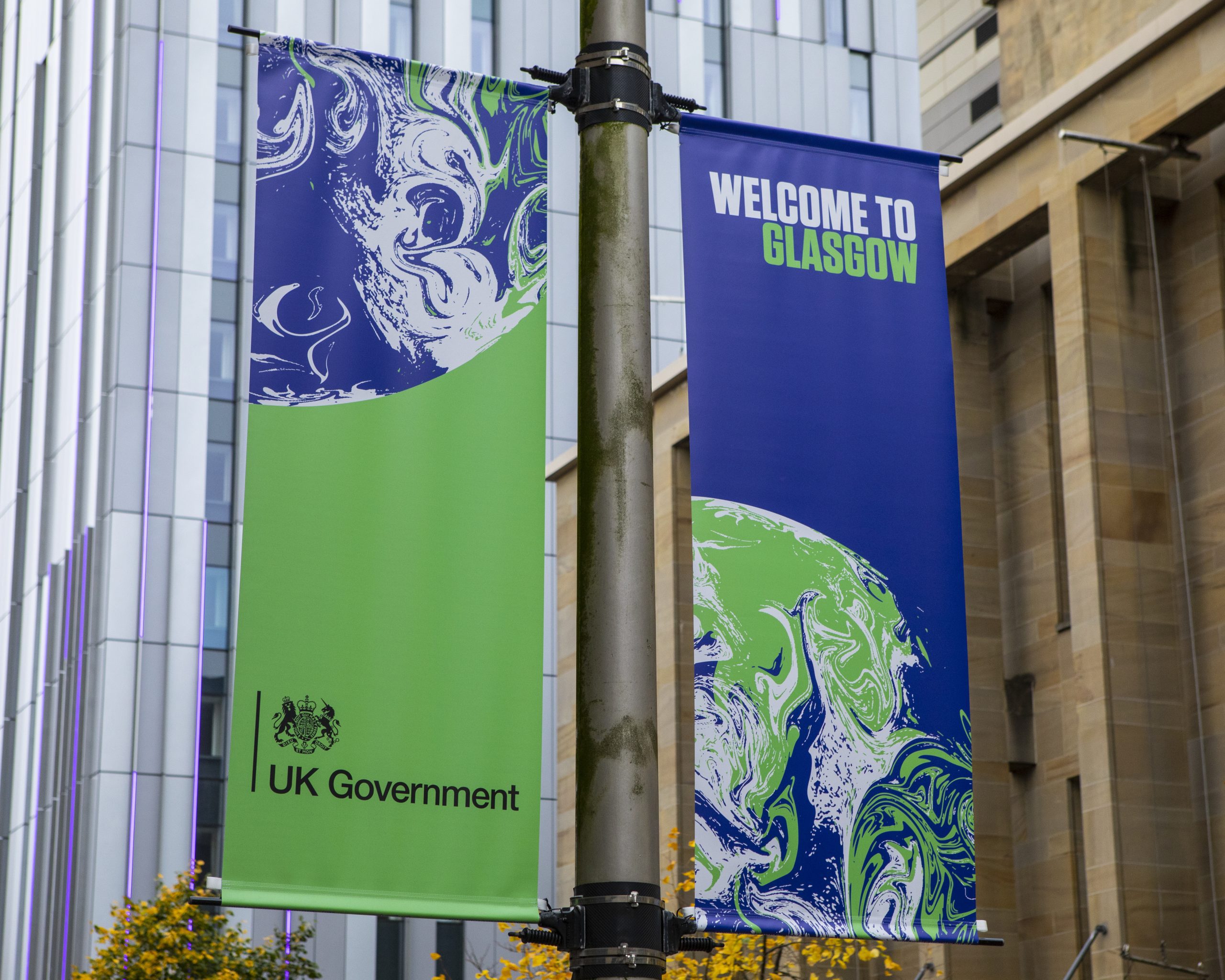 If one thing is for certain from COP26, climate finance themes emerged showing that it is finance that holds the key to a step change in climate policy. Sometimes referred to as the ‘elephant in the room’ of international negotiations, finance is often the sticking point between policy and engagement; fine words are welcome, but without funding, most of the aspirations of COP26 will never become realities.

At COP15 in Copenhagen, a resolution was made to mobilise $100b in funding from developed countries by 2020. Apart from the fact that the OECD admits that we haven’t reached that figure, perhaps only $600b so far, it was only ever going to be a starting point; tackling climate change requires trillions, not billions.

One of the keys to making a step change in climate finance rather than incremental increases is attention to the fragmentation of international funding. One of the most promising initiatives announced at COP26 was a group of donors working together with South Africa to fund $8.5 billion for an accelerated transition out of reliance on coal for power. It’s this sort of initiative which presents real hope.

Another promising announcement, and not only for its sheer scale, was that of the initiative from the Global Finance Alliance for Net Zero (GFANZ), which announced over $130 trillion of private capital committed to Net Zero aims. This could mark the recognition of CEOs that it’s vital to get involved at this stage, rather than standing aside and waiting to see what happens next.

But there were few other initiatives to match the GFANZ commitment. The group of Multilateral Development Banks, the International Development Finance Club have committed to Paris alignment, but no collective timelines or joint commitments on financing emerged from COP26.

Some development banks have pledged to make 50 percent of their investments in climate finance, but they are often competing for funding with private investors, for instance through the Green Climate Fund.

Certainly the failure to achieve the proposed $100bn a year in climate finance saw 46 of the developing countries expressing disappointment with the finance initiatives of COP26. It’s come to something when China is urgin developed countries to ‘earnestly fulfil’ commitments.

Although the OECD is now projecting that climate finance should reach $100bn by 2023, some of the details of this projection are less than clear, as the projection is not broken down by country or organization.

Some countries did make finance commitments at COP26; the Netherlands, Norway, Spain, and Sweden have made pledges each worth more than $500m per year by 2025, and if other countries such as Japan jump in, the $100b target may be met. But remember that this was first set in 2009 then endorsed by the 2015 Paris Agreement, so it has been a long time coming.

But is there another hidden problem with the OECD’s climate funds assessment? It’s been suggested that the calculation is overly generous because it counts any and all public developed finance badged as “climate”. In fact, almost half of the efforts to date are actually rebadged aid funds, and much of this has not been disbursed. And charities such as Oxfam criticise the counting of the face value of loans and private finance, rather than much lower actual cost of providing them.

For instance, although the USA has redoubled its climate finance commitment to $11.4bn per year, this doesn’t come anywhere near fair share based on US emission levels, population, or economic output, nor does it make allowance for a historic under-provision of finance.

As for the UK, campaigners point out that it has maintained its climate finance commitments by halving aid to climate-vulnerable countries such as the DRC, Ethiopia, Malawi, and Sudan. Germany, though, has emerged as a global leader, committing €6bn per year of finance as well as real-world increases in concessional finance.

It is this focus on adaptation rather than mitigation which several countries such as Canada, Denmark, and Finland have adopted in response to calls from vulnerable countries.

The Climate Finance Access Taskforce, a coalition of provider and recipient countries, has published a set of principles and pilot plans to improve access to finance for the least developed countries. The CFAT aims to tackle the problems LDCs have with accessing finance, by harmonising and access requirements. COP26 also saw a consortium of private finance investors pledging to align $130 trillion of private finance assets with net zero aims. Perhaps ironically, many members of this group are still substantially invested in fossil fuel companies.

The question remains whether finance pledges made at COP26 will be followed through. Congressional approval from the US remains a major factor while Canada and Germany are urging finance providers to make up any shortfall, so the climate finance total will hit $500 billion by 2024. India made a new pledge on emissions reductions connected to a $1 trillion plan for climate finance, though the timeframe for this plan is unclear. Italy said it was tripling its climate finance contribution to $1.4 billion a year for the next five years.

But according to the United Nations, vulnerable countries will need up to $300 billion per year by 2030 for climate adaptation alone, and this figure does not take into account potential economic losses from crop failure or climate-related disasters. Hurricane Maria in 2017 cost the Caribbean $69.4 billion, and other natural disasters, not necessarily climate-related, such as the Tonga eruption, continue to accrue costs.

European Union climate policy chief Frans Timmermans said that delivering the $100 billion figure was one of his three priorities for COP26, the others being completing the Paris agreements, and fixing more ambitious targets for the reduction of emissions. “I think we still have a shot at getting to $100 billion,” Timmermans told Reuters. “It would be very important for Glasgow to do that, also as a sign of trust and confidence to the developing world.” But considerations such as the negotiations over carbon offset regulations, which derailed the last U.N. climate talks in 2019, create a distraction from the issues of financing.

One of the reasons that developing countries reset the failure of the developed nations to reach the $100b target is that they see the amount that has been spent during the Covid pandemic. It’s been estimated by the World Economic Forum that the major economies mobilised $14t in response to the pandemic, a figure that dwarfs the $100b promised to tackle climate change. “One thing that the pandemic showed is that if the priority is big enough, the spending can follow,” said Lorena Gonzalez, a senior associate for climate finance at the World Resources Institute.

Meanwhile it continues to be difficult for devloping nations to secure private finance for adaptation projects, which will never generate a financial return. According to the OECD, of the $79.6 billion in climate finance that donor governments contributed in 2019, only a quarter went on climate adaptation.

The next question of course is what finance target will be set for post-2025. A process for setting this figure was set at COP26, but this may be affected by political considerations and progress on the existing targets.

No wonder than that reactions to finance plans emerging from COP26 ranged from enthusiasm, to accusations of ‘greenwashing’. While steps in the right direction have been made, any long-term funding commitments will be subjected to scrutiny from stakeholders, and will expose the parties concerned to reputational risk if seen to be superficial. Only the setting of strong finance targets for 2030, 2050 and beyond will mitigate possible damage to the necessary progress of COP26’s finance initiatives. The progress of COP26 climate finance themes and initiatives.

Why are Companies Investing in Renewable Energy?
30 Million EUR Response to the Global Food and Energy Crisis
What Industries are Considered to be the Most Damaging to the Environment?
Coal Emissions are the Central Climate Challenge, International Energy Agency (IEA) State
COP27: Week One in Focus
The Inflation Reduction Act (IRA): Can it Transform Business?