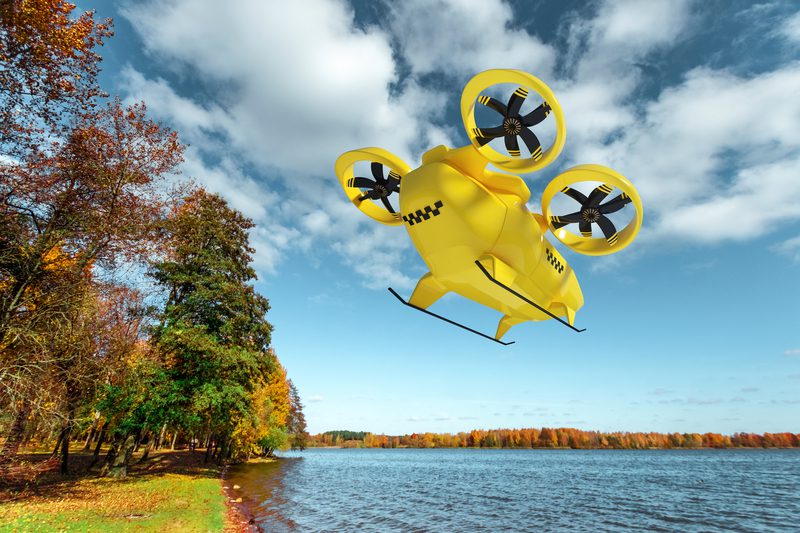 The concept of hailing a flying taxi for your daily commute would have been seen as little more than a ludicrous, and frivolous, sci-fi fantasy based around the 60s cartoon The Jetsons, until a few years ago. However, the future fantasy has now become a present-day reality, with a burgeoning industrial sector predicted by McKinsey expert Benedikt Kloss to be worth tens of billions of dollars by 2030. So are we about to witness a flying taxi revolution?

In the coming decade, electric drone-type aircraft (eVTOL) are predicted not only to become a popular means of transportation, out competing the traditional taxi, but also to be a sustainable and affordable solution to traffic congestion, and the climate change demands, that hang over every sector of the industrial world.

Envisage a world where your daily commute consists of jumping on your e-scooter to drive to your nearest vertiport, where an eVTOL aircraft transports you to the nearest city, or even as far as 150 miles away. This app-driven experience is now within the grasp of the technology and AI developments which are poised to launch an exciting new emission-free transportation industry.

According to Benedikt Kloss, the taxi and e-hailing market is worth $500 billion globally, and research indicates that between 15-20% of these passengers can envisage changing their affiliation to flying taxis. We are on the cusp of a transport revolution.

Any revolution necessitates passionate, driven and focused individuals at the helm to achieve success and as many similarly ardent followers as their endeavours can muster. Uber and Boeing already have developed the eVTOL technology required and Frost and Sullivan predicts that by 2040 there will be 430,000 such vehicles in operation around the world.

Aviation firms have been testing these technologies for some time, but are awaiting the regulators and law-makers to keep up with their progress in order to move forward.

One such Californian enterprise, Joby Aviation, has already conducted over 1,000 test flights of a eVTOL vehicle, and is focused on commencing commercial operations as soon as 2024, provided the US Federal Aviation Administration gives its approval. Joby’s vehicle, unlike some, is a piloted electrically powered machine, capable of speeds of 200mph with a range of 150 miles, transporting four passengers at a time. Joby has already consolidated a deal with a national parking firm and some other key landlords to enable roof top car parks to be transformed into eVTOL landing sites. These new mini airports are expected to pop up rapidly across the world to support this new mode of transport and have euphemistically been christened ‘skyports’. which certainly has a Jetsons ring to it.

Skyports are expected to pop up swiftly across the globe and the UK is actively involved in this technological and logistical race. Developing the infrastructure to match the technological advances internationally is now the key barrier to moving forward with this new autonomous transportation. The UK government issued a challenge to industry entrepreneurs called The Future Flight Challenge, to develop just the sort of aviation infrastructure that would be required for flying taxis to be able to operate in Great Britain. The competition was won by the company Urban Air Port.

Urban Air Port, backed by Hyundai, has plans to open the UK’s first skyport in Coventry in 2022, establishing the world’s first operational hub for flying taxis and cargo-carrying drones. Billed as ‘the world’s smallest airport’, the enterprise outcompetes all current airports with its zero emission capacity and even the geographic footprint required for the enterprise.

Executive chairman Ricky Sandhu explains that the technological capacity of flying taxis means that the new vehicles can take off vertically and land extremely accurately, and therefore, ”Our goal is to show that the turnaround time can be absolutely minimal, so that with a very small footprint, you can get high-capacity infrastructure that can support the vehicles.”

Sadhu sees the imminent launch in Coventry as a “logistics demonstration,” to illustrate just how a network of these skyports could be established across cities in countries worldwide.

Of course, establishing viable eVTOL infrastructures anywhere. is reliant on regulatory bodies like the Federal Aviation Administration (FAA) in the States and the Civil Aviation Authority (CAA) in the UK authorising them, which has not happened as yet. This is an integral cog in the future of eVTOL, which will require energy and dedication by politicians to push through.

To achieve this, the safety concerns that surround these revolutionary new technologies have to be absolutely paramount. Congested airspace has always been concerning on a health and safety front, and the prospect of flying taxis falling out of the sky onto our urban and rural landscapes, clearly has to be absolutely minimised.

However, although there is an awful lot of work to be done to establish skyport networks, the technology has enthused and excited both industry and governments alike. The technology exists and airline boardrooms and cabinet offices are poised on the edge of a technological revolution, with the absolute advantage of perfect green credentials. It is absolutely no surprise that the orders  for eVTOL machines are now flooding in.

American Airlines, for example, has ordered 350 eVTOLs, Brazil’s Gol 250, Japan Airlines and Spain’s Iberojet have both ordered 100 and Virgin Atlantic is ready to receive 150. Every national airline has a vested interest now that there is no doubt that the dream of battery-powered flying taxis is on the verge of being fulfilled. In fact, McKinsey’s Kersten Heineke forecasts that by 2030 there may be as many as 20 operatives, which then will ultimately reduce to 4 or 5 major global players.

That being the case, the question is, who are the individuals most likely to benefit from this new mode of transportation? There are conflicting opinions on this. McKinsey’s Heineke and Riedel suggest that rather than appealing to wealthy corporate clients, eVTOL could lead to a real, “democratization of helicopter flight and, ultimately, the democratization of private jets.” Riedel is confident that, “If we really get this industry to scale, this could be the same price as a taxi.”

This stance does not however appear to be currently matched by Virgin’s view of the eVTOL consumer. Shai Weiss, chief executive officer of Virgin Atlantic Airways Ltd., sees the emergence of eVTOL as a perfect opportunity to sideline cabs, cars and buses to transport rich and corporate passengers to, and from, an airport – a luxury add-on to the wealthy client’s travelling experience. Weiss is convinced that, “It’s all about the first and last 100 miles,” and that a particular clientele will be willing to spend twice their usual budget for airport commutes if speed, comfort and convenience are guaranteed.

Whether eVTOL will be sustainable and inclusive, or sustainable and exclusive, will largely depend on the investment required by industry and the support given by government regulators to enable it. Climate change no longer encourages but demands that transport operates in a new way and as airlines battle back after the economic setback of Covid 19, eVTOL could well be their saviour. The Jetsons, it seems will be coming to a town near you, in the very near future.