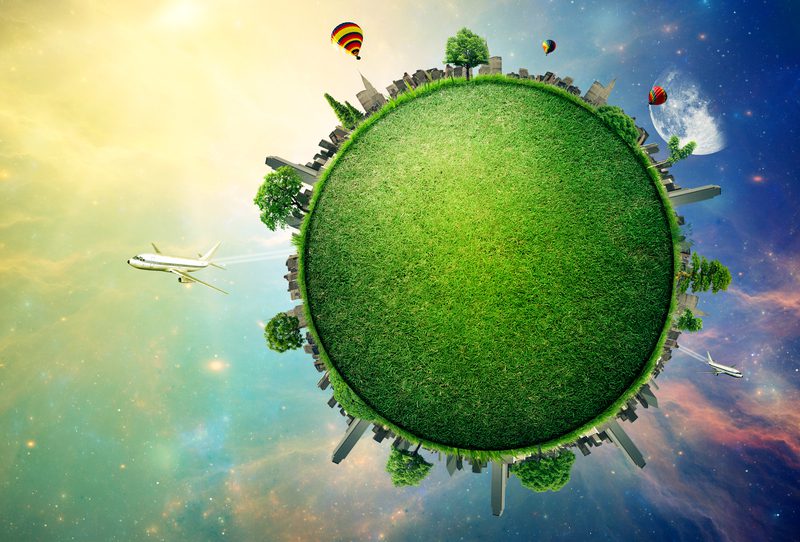 In our social media-driven society, where commerce is propelled by a yearning for originality, you may have stumbled across ‘ecospheres’ as a means to impress your nearest and dearest for a birthday or similar celebration. These glass desktop features boast of the fact that they contain both flora and fauna, and require absolutely no intervention from the owner for them to thrive and survive. The concept seems miraculous. However, this ‘closed ecological system’, is exactly the environment that humans are inhabiting every day of their lives on planet earth. Life is enabled and maintained by a series of biological and chemical processes where exhaled carbon dioxide, fuel and other waste products are converted into water, oxygen and food. Energy for those processes is provided by the sun.

The Earth is an absolute replica of that desktop novelty, although it has existed for millennia, unlike the gift option which claims a paltry two-year life span. Planet Earth is a closed ecological system in the environment of space and currently sets us apart from any other environment that has, as yet, been discovered in the Universe.

The Earth depends on the inter-relation of all its components to sustain life. It is only with an abundance of oxygen to enable breathing, and the provision of water and food that we can survive. Ecology, chemistry and weather patterns all combine to support life in a constant complex pattern of recycling. These connections are neither haphazard or random but are interwoven so that life, in all its forms can manifest in a bio-regenerative environment.

Un-earthing these interactions has been at the heart of scientific endeavour, especially when it comes to space travel, but ironically scientists are now being more tasked to understand how closed ecosystems work, not to escape the planet, but in order to save the planet from the threat of climate change and global warming.

There are in essence two types of closed ecological systems. The first, ecosphere, refers to a unique, natural, territorial, biosphere for an entire planet, in which the Earth would be included. There are then man-made ecological systems designed to sustain human life, followed loosely by the ‘bottle garden’, or aquarium, which opened our discussion, which can only maintain the lives of small plants, algae and crustacea like shrimp for a limited time period.

Three significant man-made closed ecological system projects currently exist, in Russia, America and Spain. The Russian scientists at The Institute of Biophysics in Krasnoyarsk after decades of research began their current BIOS-3 in 1965 and finally completed it seven years later. This underground steel structure is comprised of four compartments, including a crew area, and three so-called ‘phytrons’ to grow wheat or vegetables.

Light is provided by Xenon lamps, chlorella algae is used to absorb the carbon dioxide and replenish the compartments with oxygen using photosynthesis, and water and nutrients were stored in advance and recycled throughout the process. The longest experiment lasted for 180 days with a three-man crew, although dried meat was imported into the system and faeces and urine were dried, not recycled. In 2005, BIOS-3 merged with the European Space Agency, but the focus interestingly, changed to growing plants and recycling waste.

In the aptly named Oracle, in Arizona, Biosphere 2 (BIO2) has been designed to replicate five different ecosystems on earth. A tropical rainforest, savanna grassland, a coral reef, mangrove wetland and a coastal fog desert, are all scientifically researched in this facility. In 1991 four men and four women were tasked to live in BIO 2 for two years, in effect to try to manage their own planet. Although CO2 levels fluctuated, many pollinators died and emergency food supplies had to be used. Lessons learned about our own biosphere, despite the setbacks, deemed the experiment a success.

Finally, perhaps one of the best-known closed ecological systems is MELiSSA, a European Space Agency project based in Barcelona, Spain. Unlike BIO2, the aim of this research was to create sustainable life support systems for use on the Moon or even Mars and focused on animals like rats – rather than humans – to inhabit the four experimental compartments.

MELiSSA, most significantly has now turned away from space exploration, to a large extent, and is using its data to resolve current sustainability issues on the Earth. Water provision, food production and waste recycling are now at the heart of their focus. Ironically, bio-regenerative food production systems once designed to sustain life on the Moon, are not only broadening an understanding of the bio-diversity and complexity of plants on Earth, but of the conservation of the Earth’s biosphere itself.

In fact, with the expanding human population, and the accompanying need for food, it has become clear that the level of pollutants created in these processes simply cannot be absorbed in our own closed system without devastating effect.

The loss of biodiversity, the reliance on non-renewable fossil fuels, the conversion of wild ecosystems for human use have all lead to a system that is out of balance and tipping on the brink of disaster. One of the answers to these urgent dilemmas could be Closed Ecological System farming.

Closed Ecological System farming is at the forefront of sustainable research, preserving carbon and nutrients in the soil by means of recycling.

These systems not only facilitate research into genetically modified flora and fauna but can also replicate ecological challenges, and develop more appropriate life supporting resources, to be both utilised within the closed system, but then can be transferred into the external ecosystem.

Managing biogeochemical cycles, including seasonal challenges can all be attended to in closed system agriculture. Paying particular attention to

atmospheric dynamics and trace gases, soil fertility and healthy air and water can be forecast. It is all about finding a balance between all the components so that sustainability of the system is inevitable or at least predictable.

It is also notable that the research that has taken place in past decades in this area has also led to solutions regarding the habitation of human beings in remote regions of the Earth. Whether in mountains, deserts or even severely polluted industrial areas, research from closed ecological environment science offers opportunities for the survival of the human race in a multitude of scenarios. Eco-homes where humans can live comfortably and sustainably in areas as hostile as Antartica or the Arctic can only be viable if food, water and air supplies are of high and sustainable quality as well.

Closed Ecological Environments may well have started on the back of sci-fi dreams of inhabiting Mars, but there is no doubt that as global warming becomes the single biggest challenge that the world faces, they are now the best resource available to educate and mitigate the climate crisis.

Understanding how each and every element of the world’s socio, economic, geological and biological data is interlinked is key to finding an algorithm to sustain human life in the future. The lessons learnt from even that small ecosphere on the dining-room table bring us a step closer to a solution. Although it must be recognised that it took us millennia to get where we are today, it is definitely going to take us a while to reverse the effects of climate change and get the ecosphere back in balance.

SEE ALSO: What is the UN Partnership for Action on Green Economy?