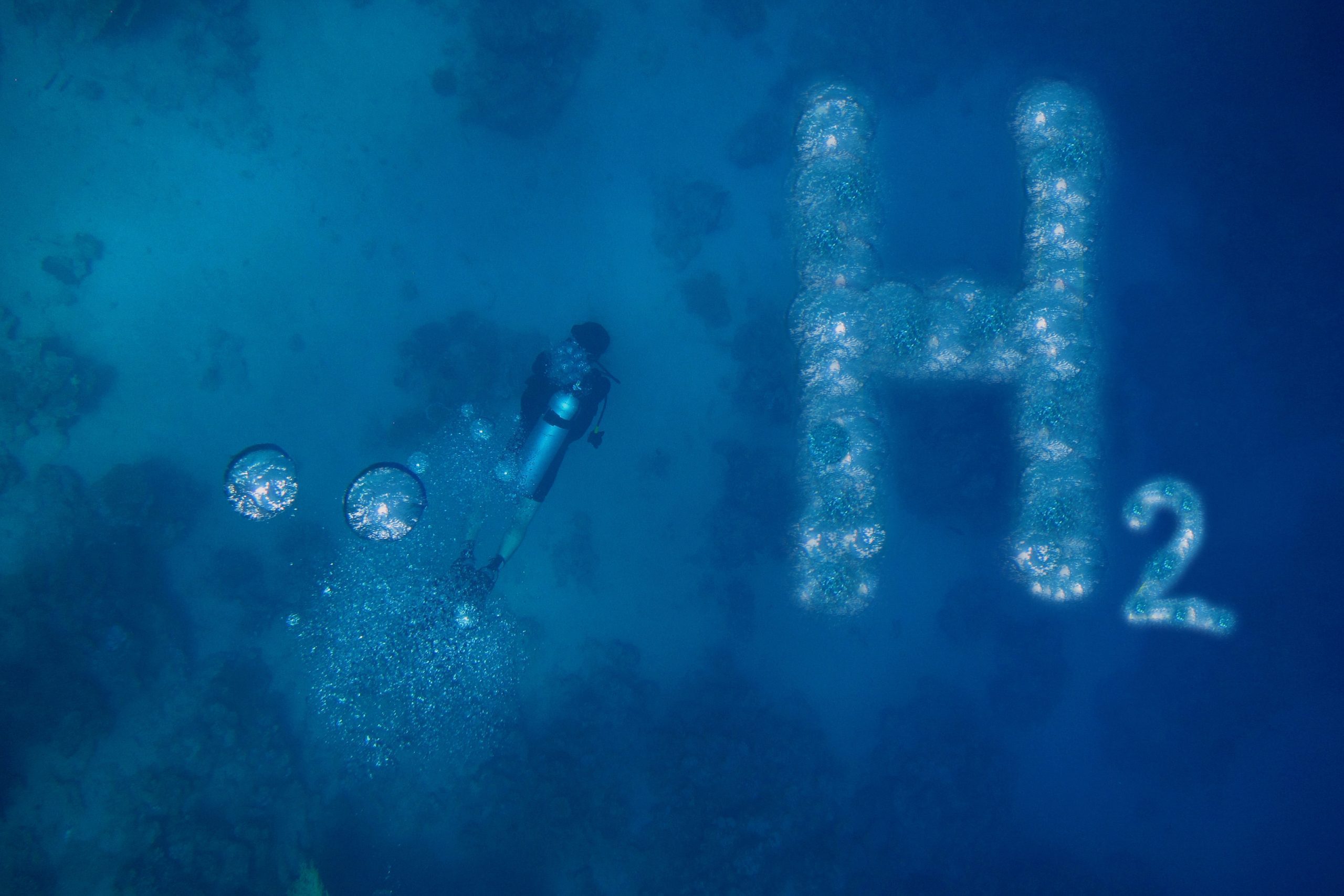 In 2021, the Intergovernmental Panel on Climate Change (IPCC) published a report containing some stark figures on the rate at which global warming was accelerating. Their findings concluded that on current projections the average global temperature will rise by 1.5C by 2040 and by an astounding 5.7C by 2100. Consequently, the race to tackle these alarming prospects has never been more focused or urgent but can seawater fuel combat climate change?

Scientists need to develop new options to remove carbon dioxide from the atmosphere, and in particular to move away from the use of polluting fossil fuels to generate energy. While global populations demand increasing energy sources to drive and sustain their economies, only if those nation states are driven by renewable and sustainable energy sources will they be able to have any sense of security about their long-term survival.

Currently, one of the most exciting options being investigated to replace petrochemicals is to harness the natural power of our oceans, with a drive to develop fuel from sea water.

Sustainability is the Pivot

At the forefront of the climate debate, sustainability has emerged as the pivot for all forward-looking discussions. Whether it is wind-turbines to replace coal-fired power stations, pseudo-meat grown in a laboratory to replace inefficient cattle production, energy-storing house bricks or ‘green’ funerals, scientists are focusing all their efforts on developing processes which do not load global carbon emissions, or at the very least, sustain the status quo.

To create and implement sustainable energy-based economies, governments have so far sought to harness the power of the wind and the sun. However, both these elements are inevitably subject to fluctuations in the weather.

Simply put, if the wind doesn’t blow and the sun doesn’t shine, without substantial storage, the efficiency of these sources is limited. Not only does this limit the efficacy of the system in terms of its reliability, but storage can be an expensive capital outlay, with its own carbon footprint.

In September 2021, the cost of power in the UK soared to an all-time high of £400 per megawatt/hour. With five nuclear units offline and windpower failing to supply its accustomed 11 percent of the national total, the market was exposed to the vagaries of gas prices; a situation which threatens to throw hundreds of thousands into ‘fuel poverty’ as the winter sets in.

It is for precisely this need for consistency of supply, reliability, and of course, manageable capital outlay, that attention is now turning to the potential power of the sea.

While fresh water might seem to be a more convenient and simpler resource to investigate, with hydroelectric power offering efficiencies of 90 percent and above, the fact is that 96.5 percent of global water is in fact seawater, with less than 1 percent non-frozen fresh water on the planet.

Oceans cover 70 percent of the Earth’s surface, so salt water is not only an abundant resource, but also one that is readily and easily accessible, so it is no wonder that science is energetically investigating how it could be used as a fuel.

The basic scientific principle at work is the splitting of water into its constituent elements of hydrogen and oxygen, ideally using sustainable solar energy to drive the electrolysis process. The released hydrogen is then mixed with carbon dioxide to create fuel. However, whilst the sea water resource is abundant, there is the big issue of desalination to overcome as well as splitting the Hydrogen and Oxygen particles with a reliable and stable catalyst to generate the desired fuel. Each of these elements present their own energy demands, carbon footprints and cost, which underlines the complexity of all these new energy propositions.

The extracting of hydrogen from sea water as a fuel source has been proposed as a clean energy option for some time. Cars and other motor vehicles have been developed that can run on hydrogen, with the key advantage being that water is the only waste product

But apart from the obvious infrastructure required to turn seawater into fuel, including pipelines, plants and desalination technology, the key to the process is to develop a high performance catalyst that is stable. Water can only be a viable energy resource with the presence of a catalyst that can split the hydrogen and oxygen atoms.

Researchers at The University of Central Florida recently published their findings in this regard with a new ‘nanomaterial’ that could be efficiently used to split the oxygen and hydrogen particles in seawater, which would enable electrolysis on an industrial scale.

The paper, published in September 2021, demonstrates evidence that this nanomaterial, described as ‘a thin material coated in nickel selenide and doped with iron and phosphor’, is apparently both a stable and long-lasting catalyst, which provides real options for generating zero-emission hydrogen fuel.

So, is harnessing the power of the sea the best way forward for global economies at this precarious moment in our history?

Certainly seawater is not in short supply and is a reliable resource, independent of the weather and geopolitics. Another attraction of hydrogen is that it appears that this green fuel can be stored, transported and reconverted into electricity in a fuel cell.

Financiers and economists also suggest that if the cost of this process was even only 1 percent less than current systems, billions of dollars would be saved worldwide. One of the principal costs is the electrolyser itself, and the biggest threat to the lifetime of the electrolyser could be the impact of water impurities.

Sea water is a variable substance full of impurities, subject to seasonal and topological changes whether from the precipitation of solids because of land-slides, or the ocean currents, or simply from ‘bio-fouling’ because of the fact that so many species rely on seawater as their habitat.

Regardless of the cause, extracting sea water for a reliable fuel will require as a first step cleaning or flushing procedures to wash away any impurities. A high-flow velocity -cleaning capability will therefore be required to maintain the conductivity of the electrolyte, otherwise significant efficiency will be lost, adding to both operating costs and carbon footprint.

Seawater Fuel to headline at COP27

Having focussed with urgency over the worldwide Covid-19 pandemic, world governments are perhaps now better prepared to act in a unified and urgent manner to overcome the threats posed to world economies by climate change.

In May 2022, Indonesia will host the Global Platform for Disaster Risk Reduction, (of which climate hazards equal 90 percent of worldwide disasters) and in November the UN Climate Change Conference (COP27) will be held in Egypt.

Both events will seek to help countries to mitigate and adapt to the challenges posed by climate change,and seek to keep global warming to below 2C by the end of the century.

The production of hydrogen fuel from seawater will be appear as a real component of this strategy, and is likely to be welcomed as a cost effective solution for countries, rich and poor alike. But there are still formidable barriers to the development of the technology as a viable alternative to fossil fuels, hence the urgent need for further research in this promising area.

Major strides are being made in Finland, a small country with big ambitions to become carbon neutral by 2035 and carbon negative by 2050, some of the most ambitious targets globally. The country has committed to leveraging collaboration and global partnerships to develop hydrogen technologies, innovations and research to help maintain and secure a viable planet for future generations.

Ground-breaking Finnish initiatives to use hydrogen to help tackle climate change include BotH2nia, an umbrella brand and collaboration platform for building a large-scale hydrogen economy around the Gulf of Bothnia and the Baltic Sea. The area of the Gulf of Bothnia has been identified as a promising region for increased hydrogen production, transport, storage and usage, and then Finnish businesses involved aim to capitalise on economic opportunities and investment, enabling the country to commence world-leading hydrogen projects and cross-industrial systemic solutions over the next few years.

Finnish smart technology group Wärtsilä, which develops solutions for the marine and energy markets, has launched a major test programme towards carbon-free solutions using hydrogen and ammonia fuels. It aims to enable the energy and marine sectors to shape sustainable and efficient future fuels in several cost-optimal steps.

VTT, a leading Finnish technical research centre, is leading the way in research, and points out that today, hydrogen represents only a modest fraction of the global and EU energy mix, and is still produced mainly from fossil fuels, notably from natural gas or coal, resulting in 70 to 100 million tonnes of CO2 annually in the EU. For hydrogen to contribute significantly to climate neutrality, it needs to be produced a far larger scale, and its production must become fully decarbonized. VTT’s is researching the development of a high-temperature electrolysis system that meets the challenges of zero-emission hydrogen production, making the process of producing environmentally friendly hydrogen more efficient. Larger power plants could be built, based on this modular, solid oxide technology achieving higher efficiency compared to competing electrolyzer technologies.

So, can Seawater Fuel Combat Climate Change? With this sort of forward-looking research, hydrogen from sea water might take its place as an alternative to fossil fuels sooner than we might expect.

New Year's Resolutions to Make Your Company More Sustainable
Why are Companies Investing in Renewable Energy?
Five Business Trends to Prepare for in 2023
What Industries are Considered to be the Most Damaging to the Environment?
How Does Every Country in the 2022 World Cup Rank on the Social Progress Index?
Coal Emissions are the Central Climate Challenge, International Energy Agency (IEA) State