The Role of Robotics in 21st Century Agriculture 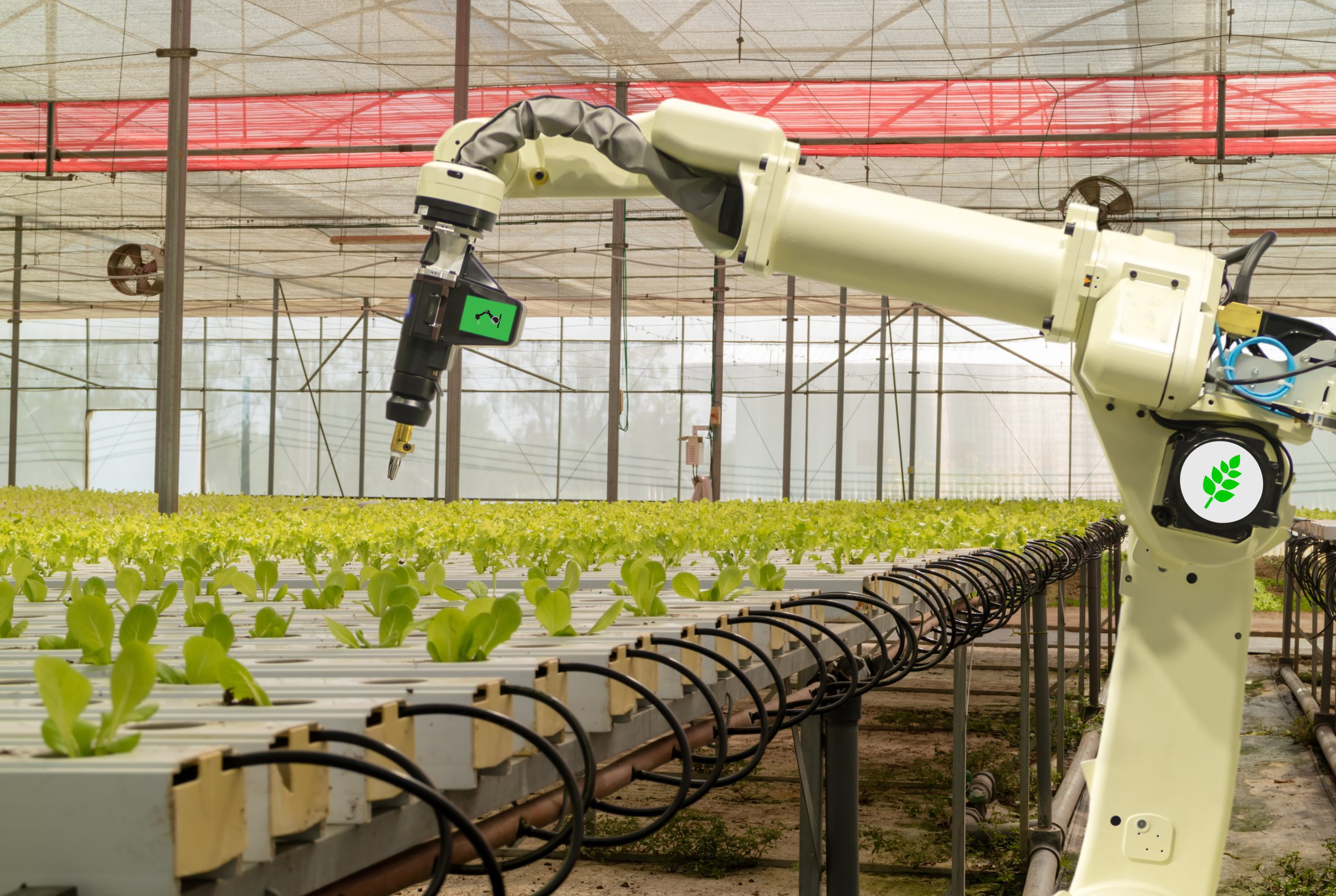 Globally, demand for food is outpacing available agricultural land, and with the UN predicting that the world population will increase from 7.3 billion to 9.7 billion by 2050, and the growing pressure of global warming, the role of robotics in 21st century agriculture is growing with farmers turning to robotic technologies to meet these unprecedented demands.

High-tech industry is rapidly advancing to change the face of agriculture forever. Agrobotics, in the form of drones, autonomous tractors, robotic arms, and a variety of other applications are set to help farmers meet the extraordinary pressures that they are facing.

From monitoring soil conditions, moisture levels and harvesting, to influencing every area of the farming process (and subsequently the food supply chain),  agrobotic technology is at the very core of meeting the complex needs of feeding human populations. Artificial Intelligence (AI) is now pivotal to human survival, not just in the boardroom, but in our rural landscapes too.

The areas in which agrobotics are thriving and rapidly increasing, are vast. Drones can now be employed for primary surveillance of a farmer crops or livestock. With Computer Vision and Artificial Intelligence, the agrobot can optimise images of a target area, and classify the findings. In terms of precision weed-killing for example, weeds can be distinguished from the cultivated product by the appropriate technology, and then killed by electrocution. The benefits to the farmer are huge – no labour-intensive manual weed control and no pesticides are required, and a better yield is produced. In fact, 250 weeds are now documented as being herbicide resistant, which according to the Weed Science Society of America has already created $43 billion of financial losses to American farmers, so treating with agrobots is a real alternative.

Pest control for any farmer is a laborious time-consuming business, particularly when operating on a large scale, and historically has relied on the senses of the farmer themselves. Now however, high-tech sensors can not only provide real time information on the health of a crop, but can also gather climate information to predict an infestation of pests which the farmer can use to prepare, and if necessary, change his management of it. Human subjectivity can be overridden with specific scientific data.

Farming can often be labour-intensive, albeit seasonally, and agrobots, although requiring initial capital outlay, can counter this demand on a number of fronts. For example, strawberry-picking machines can harvest eight acres of land in just 24 hours, a task that would take human crews a couple of weeks to match.

Harvesting and picking robots therefore, are understandably becoming increasingly popular among farmers although the nature of a particular crop has to be managed, on a technical level, very specifically, in order to prevent any damage. Cucumbers and cabbages, for example, require very different handling.

Of course, it is not only the inanimate that require the farmers’attention. Livestock place huge management concerns on a farmer and agrobotics can assist in this arena just as effectively.

Monitoring the movements of grazing herds, with collars that incorporate tracking sensors, this type of agrobotics also can harvest vital data about their health and behaviour. One firm, SmaXtec, even places sensors into the stomachs of cows to monitor their health, and can inform the farmer when they are pregnant. Of course this extra data, correctly interpreted, can certainly make agriculture more efficient , but in the case of SmaXtec, this system at a cost of $600 per animal, may not be a cost-effective way to manage a large herd.

Of course, climate concerns have not only accelerated a world-wide need for more efficient farming methods and higher yields, but they are also at the very heart of how these new systems in themselves must be managed.

Water is an integral resource to the growing process, whether livestock or crops, but climate warming has added a further dimension to an already complex issue. Managing watering in a domestic garden is hard enough when trying to bear conservation in mind, but too much or too little water in the agricultural process is a crucial contributor to a crop succeeding or failing.

Agrobotics, in coalition with IoT (Internet of Things) technology, is assisting farmers with the use of sensors in regards to watering. The sensors can measure the level of moisture in the soil, or in the crop itself, and turn on or off irrigation systems. In this way water usage can be reduced by as much as 30 percent by simply turning off the watering system at night when it is of little value, and labour costs are also enormously reduced. Once again, the subjective eye of the farmer is being replaced with factual scientific data and enabling both cost effective yields, with an eye on climate change and sustainability issues.

Smart farming management systems can track and analyse weather data and cross-check this with the needs of specific crops. Devastating weather events can be at least mitigated by the use of agrobotics, if not completely averted, which will help every farmer in their consistent pursuit of feeding an ever-expanding population.

We have touched upon the enormous impact that data collection and high tech sensors are having on 21st century agriculture, but the reach of agrobots is vast.

Autonomous mowing, pruning, seeding and spraying are becoming commonplace, with complex environmental interactions being communicated to farmers in a language that they can effectively interpret. Agrobotics has created an interface where humans, animals and plants can communicate their own needs and a solution can be sourced to meet each as closely as is possible. The intelligence of the farmer is, of course, at the forefront, but now the intelligence of the natural world as a whole is being both appreciated more greatly and sourced more readily. Mechanisation and environmental biology are now inextricably linked.

Of course one obvious advantage of agrobots is that however robust any farmer might be, a robot (or sensor) can work endlessly in any weather conditions.

In conclusion, it is clear that automation and data collection (AI) are revolutionising every industry, and that includes agriculture. In fact the tech sector in the agricultural countryside is projected to be worth more than £136 billion by 2025.

It is no surprise that the UK government launched an Agri-Tech strategy in 2013 in recognition of the projected future of agrobotics which has now certainly come to fruition. The science is developing swiftly to meet the demands of the agricultural environment, with a burgeoning technological industry, but there are now even more ambitious targets to meet, through the escalating nature of climate change and more specifically, global warming.

The National Farmer’s Union (NFU) as an example, ambitiously aim to achieve net zero emissions by 2040. Their three pillars of, improving farming’s productive efficiency, improving land management and changing land use to capture more carbon, and boosting renewable energy and the wider bio-economy, can only be achieved if agrobotics is in the root and branch of their plan.

SEE ALSO: Use of Robots in the Food Industry
Share:

New Year's Resolutions to Make Your Company More Sustainable
Coal Emissions are the Central Climate Challenge, International Energy Agency (IEA) State
Chemical Recycling Technology: Is it the Future?
The Sustainable Development Goals - What are the Targets Now?
Top 5 Leading Electric Vehicle (EV) Manufacturers of 2022
Why Green Tech Has a Bright Future in Business and Manufacturing