Use of Robots in the Food Industry 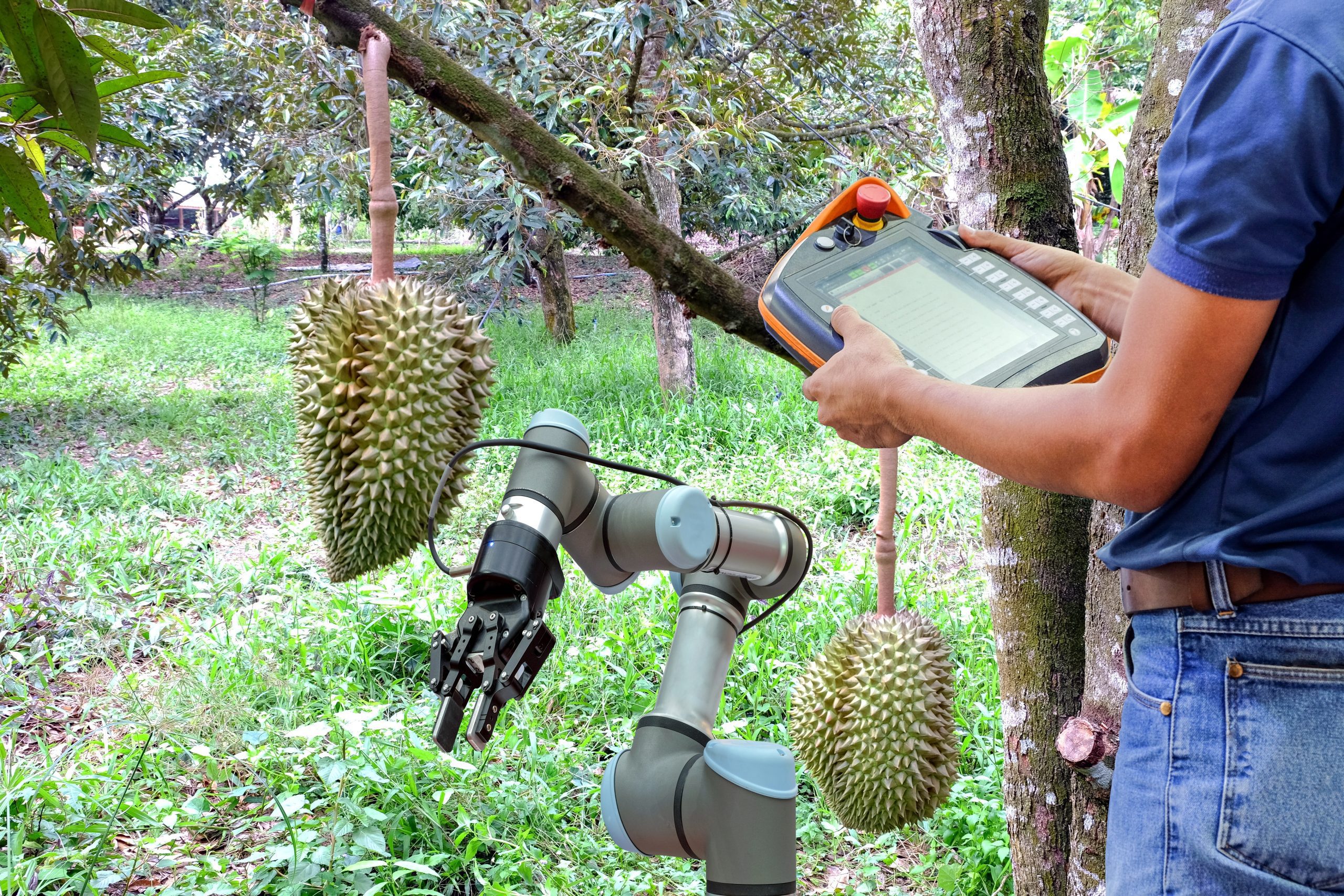 The food industry has seen a significant uptake in the use of robotic applications in recent years, despite the sector being relatively slow in adopting the technology compared to other areas. The industry is known for having a number of complex steps with many businesses ranging in size investing in these robots to help optimize and revolutionize the whole process. From the early agricultural stages right through until the delivery, the use of robots in the food industry has made a notable impact in each and every step.

The food industry commences within the agricultural sector. Meat, crops and dairy products are all produced within this sector. To help enhance the job of providing these food products, robots have been specifically created and programmed to tackle an array of tasks which include picking crops, remove weeds, collect eggs and feed animals. One example to look at depth is the task of picking fruit or vegetables at a farm. Traditionally, this has been a job done by humans due to the delicate touch needed to avoid damaging the products, as well as the capacity to recognize when they are ready to be picked. However, there has been a rise in robotic substitutions that provide the same guarantees but also better the procedure by being more effective and efficient. According to data from the International Federation of Robotics (IFR), more than 7,000 agricultural robots were sold in 2020, an increase of 3% compared to 2019

The effectiveness and efficiency of robotic technology is also apparent during the stages of cutting and slicing. Despite the relative simplicity of the task, what a robotic application can provide is pin-point accuracy. For example, if a product needs to be sliced in a certain manner, a pre-programmed stationary robot with the correct information can conduct this task with extreme precision, making sure the required slices are uniform.

Whether it be stationary-type robots, autonomous robots or drones, these robotic applications contribute positively to the agricultural sector. The technology frees up farmworkers, reduces labor costs, mitigates damage and most importantly increases productivity. The Robot Report assembled a list of businesses and agencies that have obtained this technology.

In addition to robotic application being involved in primary processes, the technology has also been acquired within secondary processes. This stage of food manufacturing includes the responsibility of packaging.

The packaging process is one of the more established process within the whole industry where robotic applications are an intrinsic part with the whole process shifting more and more towards automation. A study carried out by the Association for Packaging and Processing Technologies revealed that 94% of food packaging operations were conducted using robotic application during the past few years. This can include tasks such as pick-and-placing, packaging raw foods, boxing and palletizing.

Types of robots that can be commonly found during this stage include autonomous robots, vision-guided robotic arms and delta robots. This robotic technology can bring benefits such as higher production levels in a shorter period of time, precise packaging and reduced labor costs. Furthermore, due to the ever-rising consumer demands, robotic applications can be adapted to help meet these demands with swift proficiency.

As well as packaging, robotic applications has also be established within food delivery. Some of the largest companies in the world have invested in the technology especially in more recent years due to the emanation of the COVID-19 pandemic. As a result of the closures of various restaurants, the demand for food delivery has grown. According to Statista, the number of people using food delivery services across Europe is expected to reach 96.9 million by 2024.

One of the companies that profited from the demand were Starship Technologies. CEO of the robotics company, Alastair Westgarth, said: “we saw demand for robot usage just go through the ceiling.”

“I think the demand was always there, but it was brought forward by the pandemic effect,” he continued.

As well as to delivering to homes, autonomous robotic vehicles have been also been used to deliver meals to students on campuses. Independent delivery robot company, Kiwibot, joined up with hospitality giant Sedexo, to help supply meals to colleges campuses. In some cases, drones have also been programmed to carry food to a set location. Unlike the process of packaging, adoption of robotics in delivery has not as widespread but to the growing demand of delivery, we might expect to see a large overhaul in the industry.

You might think that having appliances such as a toaster or a microwave is relatively advanced however, due to recent technological advancements, companies have started to build and develop robotic technology that will cook recipes for you at home. In early 2021, London-based robotics company, Moley, announced the creation of the first ever robot chef which is due to be released this year. The company hopes that future models will be pre-programmed to cook 5,000 different meals. The idea is that you pick a dish you would like made presented on a touch screen, gather the ingredients needed and place them in the machines built in containers and then it gets to work. However, this technology does not come cheap with the Moley’s model priced at £150,000.

When describing the operating system within the machine, chief executive at Moley Robotics, Mark Oleynik, said: “As an additional measure, we have safety radar systems able to detect any unwanted impacts between the robot and any surface and immediately stop the operation, thus mitigating any such risks altogether.”

If you think that is great, Wilkinson Baking Company, created a device known as ‘BreadBot’, an all-in-one, automated bread making machine. Developed in 2019, it goes through the whole process of mixing, kneading, proofing and baking. It is believed that the machine has the capability of producing six loaves an hour and approximately 250 loaves a day, without hardly any human interaction. As a result of the staggering information, the technology has garnered a lot of comments. The Washington Post said: “With the Breadbot, human intelligence has been replaced by 20 data-gathering sensors that monitor the bread 100 times a second and adjust the baking process in real time.” BreadBot debuted at a Stop & Shop in Milford, Massachusetts and is set to appear in more of our favourite supermarket stores in the near future.

Supermarkets aren’t the only area that have delved into technology as some restaurant businesses have begun incorporating different types of robotics of their own. Factors including new minimum wage requirements and the rising cost of raw materials has caused these businesses in venturing into different avenues. Spyce Restaurant in Boston became the industry’s first restaurant to have a robotic kitchen. All the cooking is taken care of on demand by various robots in the restaurant with a couple of staff employees who prepare the ingredients. But Spyce are just one of very few who across the world who have invested in this cost-saving method. Compared to the other areas within the industry, cooking is a stage where robotic technology has not yet managed to gain hold a tight grip.

The use of robots in the food industry is continuously increasing, with manufactures investing more in the machinery to boost their businesses. The numerous benefits can be placed in three different categories, cost competitiveness, product quality and role. Labor costs have continued to increase with manufacturers attempting to get to grips with availability issues due to factors such as a rise in economy and ageing workforces. These issues can slow business down and subsequently what the addition of automotive applications is improve productivity and help companies rely less of the workforce to carry out certain tasks. Food quality and safety standards are always rising with retailers continuing to incorporate firmer product specifications. A strength that this technology can bring is it can meet and exceed both the quality and safety standards which many are looking for. There will be less chance of possible issues of contamination and products will be produced at a more consistent rate. Roles within the industry can also be enhanced due to the introduction of automation. It is well known that there is a lot of tasks that involve hard manual labor which can damage the wellbeing of a member of staff. The guarantee that robots can bring is that can take over these tough tasks without there being any worker safety or wellbeing issues for a company to stress about. These numerous benefits are why we are currently witnessing a robotic revolution in the industry.

SEE ALSO: Use of Robots to Transform Your Business