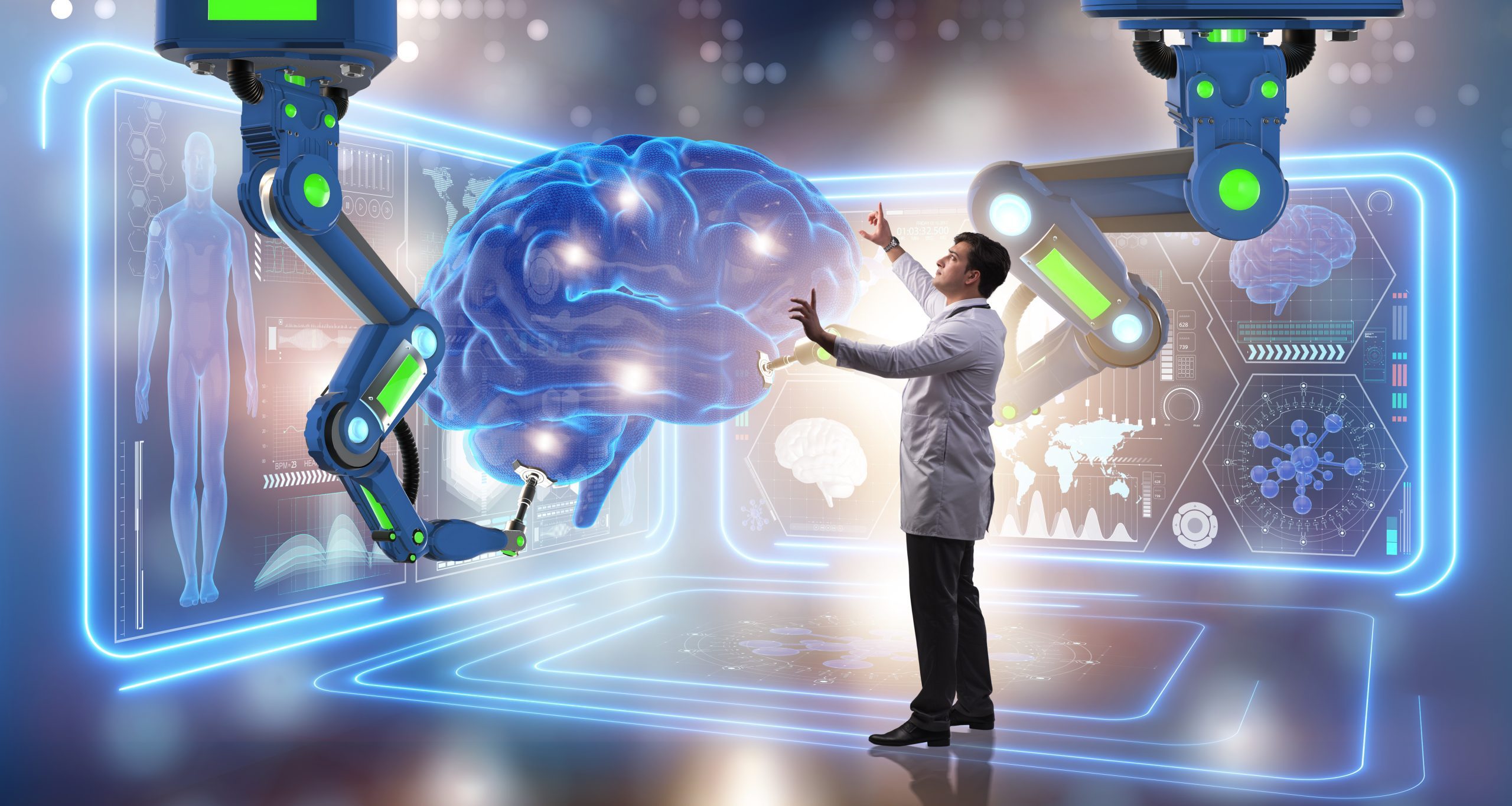 Robotic technology is making a big impact in the medical field with an increased number of robots operating significantly in a wide range of functions behind the scenes. Due to the recent rise of automation, assisting applications have been established in various healthcare practices including surgery and rehabilitation and have been of huge help to doctors, nurses and patients internationally. With the issues the world has suffered over the past two years because of the coronavirus epidemic, deployment of robotics has only accelerated. As a result, a wide range of companies have been designing different types of robotic machinery with the aim of transforming healthcare using robotic technology.

Robotic assistance in surgery has been evolving for a number of years allowing doctors to perform a variety of procedures with improved precision and control. One of the most renowned technologies used across the world is the da Vinci system, which was launched in 2000 by Initiative Surgical, one of the world’s leaders in robotic-assisted surgeries.

This is an extremely advanced robotic system that has been used on over 775,000 patients for different surgeries including cardiac, gynaecological and colorectal. The system consists of an ergonomically designed surgeon’s console, a patient cart alongside four interactive robotic arms and a high-efficient vision system and individual EndoWrist instruments.

This technology aids doctors perform complex operations without making unnecessarily large incisions and due to the success, it has seen increased levels of deployment. According to figures recently released, in 2021, use of the da Vinci system grew around 28% compared with 2020.

Also significant is the Mako system, a robotic arm assisted surgery system which has been developed to aid surgeons on orthopedic operations such as knee and hip replacements. The Mako software, which includes 3D imaging, can be pre-programmed by the surgeon and will be able to perform the procedure, carefully and accurately removing bits of bone and cartilage from the required area. The technology can be beneficial to both the surgeon and the patient. The surgeon can use the Mako system to plan the procedure and also provides real-time sensory feedback while for the patient, it helps minimize loss of blood and creates a smaller scar as well as helping to preserve the soft tissue in the area and keeping bones healthy.

Director of thoracic surgery at The George Washington University Hospital, Dr. Keith Mortman, says the robotic assistance offers healthcare professionals better authority. “We have the ability to simultaneously control all four arms for that robot, with one arm holding the camera,” Dr. Mortman says.

Over the years, there have been others that have expressed an interest in the surgical robotic area. In 2019, Pharmaceutical giants Johnson & Johnson purchased Auris Health for $3.4 billion to elevate the use of Auris’ robotic technology within surgical specialties. Executive Vice President and Worldwide Chairman, Medical Devices at Johnson & Johnson, Ashley McEvoy, stated that their plan was to “build a connected, data-driven digital ecosystem that pairs our market-leading surgical solutions with advanced technologies to improve the patient experience.”

As a result of more and more companies realizing the benefits that these applications bring, the market for the technology has experienced significant growth. A study in JAMA Network Open revealed that robot-assisted surgeries now account for 15.1% of all general surgeries in the USA, up from only 1.8% in 2012. This rise looks to continue as surgical robots accounted for in excess of US$5 billion sales in 2019 with the Iternational Financing Review expecting sales to continue growing by 23% between 2020 and 2023.

There has also been an increased use of robots in rehabilitation. The role of these robots is to aid those who have suffered and are recovering from common conditions such as strokes, paralysis and spinal cord injuries. These robots can come in the form of exoskeletons and prosthetic robotic legs and arms.

An example of a rehabilitation robot is the Cyberdyne Hybrid Assistive Limb (HAL) exoskeleton. This was developed by robotics company Cyberdyne in company with Japan’s Tsukuba University and supports those who suffer from lower limb disabilities. The technology itself incorporates sensors placed on the skin to identify “bio electrical signals” so that desired movements can be carry out through the joints. The HAL suit gained a global safety certification in 2013 and since then has been used on patients in various nations such as the UK, Canada, France and Germany.

ReWalk, another leading robotic manufacturing company who also created their own exoskeleton suit, announced in 2019 that the U.S. Food and Drug Administration cleared their ReStore Exo-Suit and it has since been of vital use in various rehabilitation centers throughout the United States.

Key benefits of these robots over standard rehabilitation exercises include their ability to monitor a patient’s progress. The technology ensures that movements are performed repeatedly with the same accuracy as a means of training the brain. The progress made is then measured and collected allowing healthcare professionals to evaluate what stage of rehabilitation the patient has reached.

Similar to the surgical-assisted robots, the exoskeleton market has also experienced growth. According to a report, as of 2021, the exoskeleton market is valued at US$499 million and is forecast to reach US$3,340 million in 2026. Due to the high number of people suffering from disabilities such as strokes and with technology continuing to advance, the area of rehabilitation will continue to experience a robotic revolution.

Besides aiding healthcare workers on the medical side, there have also been a rise in service robots in hospitals covering regular logistical duties. Autonomous robots are programmed to be involved in patient screening, surface disinfection, positioning of medical devices and distribution of medicines. This helps healthcare professionals focus on spending more of their time on patients that need attention.

An example of technology that provides this advantage is the Aethon autonomous robot. Launched in 2017, the robot is programmed to carry out a number of tasks, including according to Aethon, “secure delivery of pharmacy medications and laboratory specimens and heavier loads such as meals, linens, and environmental services… all moved autonomously.” Since the advent of COViD-19, this application has been deployed more regularly within hospitals. Aethon state that their robots have travelled over 5,000,000 times a year undertaking different tasks.

Another field which has progressed incredibly is prosthetics. Whether in replacing limbs lost to disease or injury or enhancing abilities of workers, robotic prosthetics such as those from

MIT Biomechatronics lab can track their own position in three-dimensional space and adjust their joints upwards of 750 times per second. Adding the possibilities of bionic skins and neural implant systems that interface with the nervous system, allowing the user to receive tactile feedback from the prosthetic, opens up the prospect of volitional control as you would move a normal limb.

Conventional endoscopy, a procedure where a small camera on a long wire is inserted into the body through a “natural opening” to search for damage, foreign objects, or traces of a disease, is an uncomfortable and delicate procedure, but robotics may make conventional endoscopy a thing of the past. Companies such as Medineering are developing slender, flexible robots that can be driven by radio control to the area the doctor needs to examine, and can he held there while deploying miniaturized tools for functions such as biopsy and cauterization. It’s not quite sci-fi movie Fantastic Voyage, but it’s getting there.

Closer to the ‘minisub’ idea from Fantastic Voyage is capsule endoscope, a robot the size of a pill which can be swallowed, and which relays images and data as it travels along the patient’s digestive tract, sending it to a processing system for analysis.

The role of robotic technology has expanded beyond the hospital. Robotics company Luvozo has created a “robotic concierge” named SAM that “provides check-ins and non-medical care in care homes.” The robot incudes autonomous navigation, telepresence and an innovative fall hazard system to help care for residents.

There have also been advancements within dental care. Sonendo created the GentleWave System designed to simplify root canal treatment. The system helps clean and disinfect microscopic spaces within teeth. This emphasizes the expansion of robotic technology within healthcare and how there has been an escalation is the use of the machinery.

What does the future hold for Robotics in Healthcare?

Health robots will continue to evolve with developing technology and we will witness increasing number of hospitals adopting technology from various companies, whether it be for medical or logistical purposes. They will continue to enable a high level of patient care, operate efficiently and provide a better working environment for healthcare professionals. Due to these benefits, a large number of people will become more willing to engage with robotics to aid their healthcare procedures. According to PwC, 73% of people would be willing to undergo minor surgery undertaken by a robot. This willingness means that businesses can confidently progress their technological plans and continue with the  transforming healthcare using robotic technology.

SEE ALSO: Drone use in Business

Top 5 Leading Electric Vehicle (EV) Manufacturers of 2022
Why Green Tech Has a Bright Future in Business and Manufacturing
Visions of the Future for Global Technology Governance
AI: The Good and The Bad
How Can Robotic Process Automation (RPA) Boost Business?
How Blockchain and IoT Can Live Together