Drone use in Business 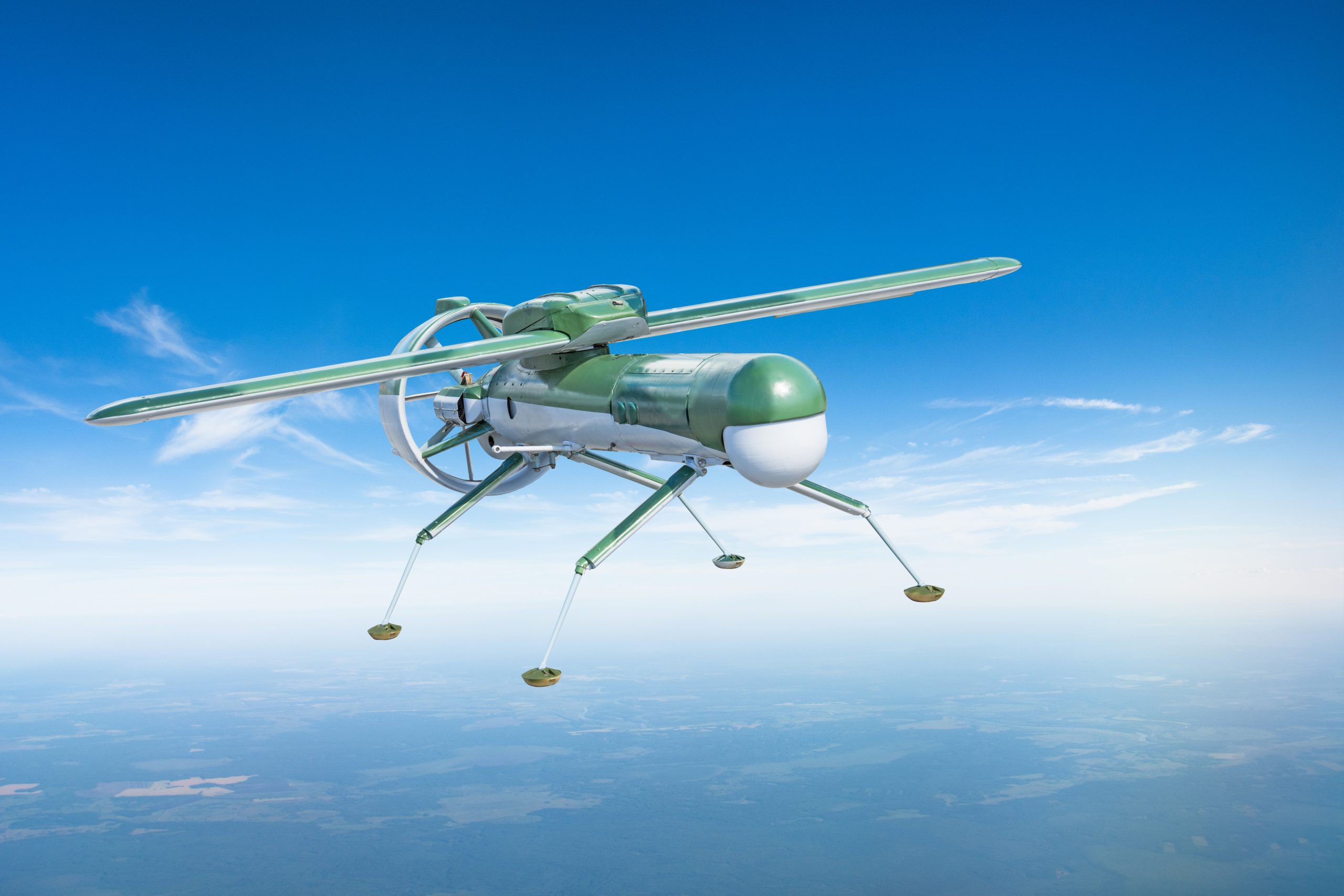 A study by PWC into the impact of drones on the UK economy predicted that by 2030 there could be a £42 billion increase in UK GDP, with 76,000 drones operating in the UK’s skies, contributing to a £16 billion in net cost savings to the UK economy, and a staggering 628,000 jobs created in the drones economy. With such grand and encouraging figures, it would be pertinent to look into drone use in business – from military to medicine.

The use of drones or UAVs (Unmanned Aerial Vehicles) in the military is the most familiar in popular culture, and not without controversy. Drones, in a very naive form, can be traced back to the First and Second World War, where unmanned aircraft were used by Allied forces to spy on enemy forces, and Germany developed the V1 ‘buzz bomb’, a pilotless flying bomb.

Today’s military drones are much more advanced than the UAV of the past, essentially unmanned aeroplanes, piloted remotely and equipped with laser range finders, thermal imaging, and tools to carry out airstrikes and targeted killings. The drone most commonly used by the US military today is the MQ-9 Reaper, which measures 11 metres in length, can fly 1,150 miles undetected and is equipped with a range of intelligence gathering systems and missiles.

But of course there are peaceful applications for drones, from rescue to delivery. In this application the more common form of drone is the quadcopter, using four contrarotating sets of blades for lift and steering. In many cases where it is not safe to send a human into a disaster scene or rescue mission, the lightweight drone equipped with a video camera can be first on the scene.

And drones are not limited to the air. If there has been an emergency at sea, such as a capsizing or someone has been stranded, officials can employ an Autonomous Underwater Vehicle (AUV) to help with their recovery. Kaman, the aircraft manufacturer, has developed a pilotless helicopter, called the K-MAX, designed to carry more than 6,000 pounds of cargo that can help in the fight against fires, and has been used in Australia and China.

According to Verdict, The UK’s Maritime and Coastguard Agency (MCA) has demonstrated the use of an Elbit Systems UK drone for maritime search and rescue flights in the UK.

The MCA undertook a number of trial flights during the first two weeks of September during which the aircraft flew Beyond Line of Sight (BLOS) missions in “unsegregated and uncontrolled airspace” in alignment with the UK’s Civil Aviation Authority (CAA).

Commenting on the trial, HM Coastguard director Claire Hughes said: “We continue to do all we can to use existing technology as well as look to the future in our ongoing work of saving lives at sea. Remotely piloted aircraft continue to be a big part of that work both to potentially save lives in search and rescue and protect our beautiful coastlines from the worst effects of pollution.”

Drones also have the potential to be beneficial to the agriculture industry, presenting farmers with several ways to optimise their farms to maximise efficiency and reduce physical strain. Carrying out field surveys, seeding over fields, tracking livestock and estimating crop yield are all made easier through the use of UAVs while saving agriculture professionals valuable time.

In 2021, Harper Adams University Researcher Jonathan Gill told a meeting of the All-party Parliamentary Group on Science and Technology in Agriculture about some of the opportunities the use of spray drones in agriculture could present, including reducing fossil fuel intensive farming (as spray UAVs run on wind and solar power) – and increasing the transparency of food provenance.

Drawing on work from Harper Adams University’s ‘Hands-Free Hectare’, he explained how drones can be used to distribute plant protection products equally and in a targeted manner – “used correctly, an operator or farmer can know where, when, and how much chemical is distributed to an area – which allows the provenance of the food produced to become ever more transparent.”

Drones used for delivery are autonomous UAVs that are employed to transport goods, such as packages or food, to your front door. Because they are often used to make deliveries from stores to nearby warehouses, they have become known as “last mile” delivery drones.  These drones can carry an impressive 55 pounds of goods to your front door without you ever having to leave the house. In America, many different big brands are currently testing different versions of delivery drones, including Amazon, Walmart, Google, FedEx, and UPS.

In May 2021, the BBC reported that Royal Mail will trial the use of drones to deliver health and safety equipment, COVID-19 testing kits and other items to the Isles of Scilly. It will be the first time an out-of-sight autonomous scheduled drone flight has been used between the UK mainland and an island, the company said.

In America, NASA and the U.S. Air Force have been testing out unmanned aircraft geared towards space travel. The X-37B UAV has been quietly circling the Earth for the last two years, setting a record for longest flight from an unmanned aircraft (more than 719 days). The objective has been to test reusable spacecraft technologies for America’s future in space and operating experiments which can be returned to, and examined, on Earth. In layman’s terms, that means to test out new sensors and other next-generation satellite technologies, to see how they perform and hold up in the space environment. Drones have been made a priority when it comes to the future of space exploration and innovation.

UAVs are becoming instrumental in historical conservation efforts. Drones are being used to map out 3D renderings of historical sites like Chernobyl, the ancient Greek sites of Ephesus, Turkey and Jewish cemeteries all over Europe.

According to Heritage England, drones provide a useful low-level aerial platform for recording historic buildings, monuments, archaeological sites and landscapes. They can carry a wide variety of sensors including cameras, multi/hyperspectral imaging units, and even laser scanners. Drones can provide dramatic illustrative photographs of sites, but can also be used to create metrically accurate records for survey and conservation work. However, care needs to be taken to ensure drones are used in a way that is safe to both people and the historic fabric being recorded.

To get medical supplies to remote areas without much infrastructure, drones provide an effective solution. Drone delivery of medical supplies or vaccines existed years before the pandemic. American startup Zipline was delivering supplies in Rwanda in 2016. Conducting the first round of drone test flight in 2018, WakeMed Health & Hospital in Raleigh, North Carolina, together with the North Carolina Department of Transportation’s Division of Aviation, sent drones “to carry simulated medical packages from Raleigh Medical Park, located across the street from the campus to the main tower at the hospital.” Not a long haul, but still, an important one, for drones in Rwanda fly easier in its less-regulated and less crowded airspace than those in the U.S.

Zipline remained active in Africa during COVID-19. More recently, they helped in the delivery of COVID vaccines in Ghana, where the company has been actively delivering medical supplies since 2019. By bringing 11,000 vaccines in a matter of days, the important batch quickly reached remote areas – places that otherwise were challenging to get to by means of traditional logistics. In 2020, the company also began service in the U.S., where they delivered PPE and other supplies to a hospital in North Carolina. This was “the first time the FAA has allowed beyond-line-of-sight drone deliveries in the US.”

But Zipline isn’t the only company using drone delivery. German manufacturer Wingcopter has partnered with Japan’s All Nippon Airways to deliver medical supplies to the island communities of Japan. The goal of the trial project is to set up commercial drone flights by 2022. The trial was promising, decreasing patient waiting lines dramatically.

In TV and movie production, drones are now commonly used to obtain high-angle shots, replacing expensive helicopters and inconvenient ‘cherry-pickers’. Production for major feature films requires complex systems called “heavy lifters”, drones which can fly up to 55 pounds of gear, including high-end cameras and lenses. But even for smaller productions, drones such as the DJI Phantom or the Inspire 2 system can fill the bill, providing basic single-operator flight functions yet still delivering stunning, high-quality aerial stills and video. The quality vs. complexity paradigm is invariably thinning year by year.

One inevitable result of the increased drone use in business is that a complex regulatory framework has been put in place to control their use. It ought to be mentioned that legally, model aircraft are also considered drones. These range in size from small light weight models to gas-turbine powered scaled replicas, capable of very fast speeds and weighing close to 10kg. You can find out more about the regulations covering the UK at https://www.gov.uk/government/news/drones-are-you-flying-yours-safely-and-legally.

New Year's Resolutions to Make Your Company More Sustainable
Chemical Recycling Technology: Is it the Future?
Top 5 Leading Electric Vehicle (EV) Manufacturers of 2022
Why Green Tech Has a Bright Future in Business and Manufacturing
Visions of the Future for Global Technology Governance
AI: The Good and The Bad