What Exactly is LiFi? 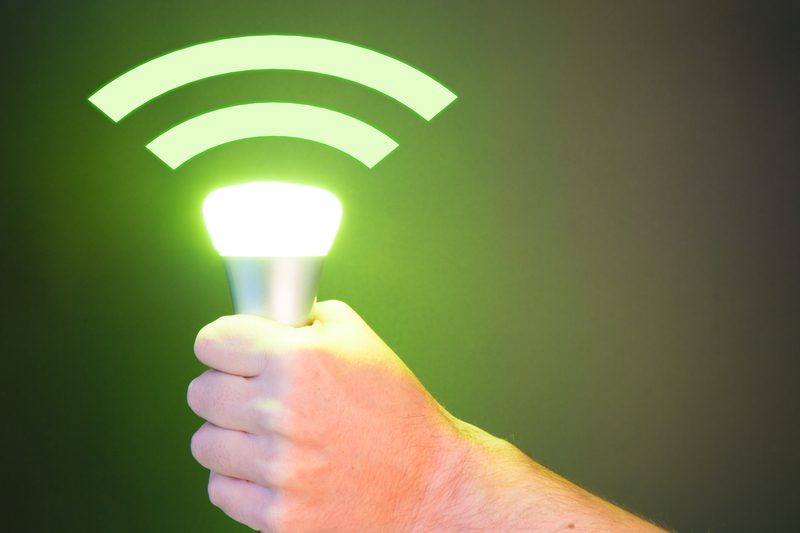 The internet has become an essential part of our daily lives whether it be for work, socializing, entertainment or shopping. In the UK, IBISWorld reports that 96.6 percent of households have internet access – worldwide the figure is a still impressive 60 percent, and of course the demand will always be for more and faster connections. Ultra-fast broadband using optical fibre connections instead of old-fashioned copper wire is one way to meet the demand – but what if we get to the stage where demand for internet data exceeds the supply? And what about the isolated households where installing a dedicated cable is not cost-effective? What exactly is LiFi and could it be one answer?

What is LiFi and How Does it Work?

LiFi stands for Light Fidelity and is mobile wireless technology that uses visible light rather than electrical signals to transmit data. The Visible Light Communications (VLC) system used runs wireless communications at extremely high speeds of up to 224 gigabits per second.

The technology uses an LED light bulb to emit pulses of light that are invisible to the naked human eye and inside those emitted pulses, data can move to and from receivers. Afterwards, the receivers gather information and interpret the transmitted data.

Fundamentally, under this technology, a standard light bulb becomes a router. The technology was first formulated by Professor Harald Hass at the University of Edinburgh in 2011. During a TED Talk, Haas claimed that light bulbs could eventually act as wireless routers in the future. In 2012, after years of research, Haas established the company called ‘pureLiFi’ with the intention ‘to be the world leader in Visible Light Communications technology’. Since then, LiFi research has grown in breadth with various businesses including Philips investing in the technology.

Difference between LiFi and WiFi Technology

WiFi and LiFi are similar because both technologies are wireless, but they have key differences. LiFi requires light signals to receive and transmit data while WiFi requires radio frequencies. This usage of light provides an almost instantaneous connection due to the rapid nature of the speed of light. This brings about data transmission and internet connections at approximately 100 times faster than speeds possible by using WiFi technology.

Another major difference is with regards to LiFi technology’s inability for its signals to pass through walls. As a result, fully connectivity can only be achieved if LED bulbs are placed in various areas within the home or workplace. A benefit of this is it is difficult to tap sensitive data transmitted through LiFi and therefore offers a more secure transmission. Plus, these lights will need to remain on to ensure that connectivity is available all the time. However, the use of LiFi instead of WiFi will help refute a large majority of security issues that are associated with strained and shared broadband networks.

Which Companies are Investing in LiFi?

Li-Fi technology has blown up in recent years as it attempts to secure its place within the future of technology with many established companies deciding to explore this technological advancement. Some of these businesses have already developed their own LiFi-related products with other still processing the technology.

One of the frontrunners are pureLiFi. PureLiFi have a number of products already on the market such as a LiFi ceiling unit to connect to an LED light fixture and Li-Fi-XC for the purpose of connecting to a device via USB or as part of the hardware, giving around 43Mbps from each LiFi-enabled LED light. In 2019, the company announced one of their biggest deal with the completion of a $18m series B fundraise to provide LiFi components to mass-market mobile devices and lighting manufacturers.

Alistair Banham, CEO of pureLiFi said: “Device manufacturers are looking for new ways to provide devices with faster, more reliable and secure connectivity. LiFi is the natural next step in the evolution of global wireless communications and pureLiFi is leading the way to provide this technology to the market.”

Worldwide mobile network providers, O2, incorporated some of their technology as part of a trial. In 2018, the company installed pureLiFi’s LiFi-XC system in their ‘Explore Room’ at their Slough headquarters. Commenting on the technology, O2’s Chief Operations Officer, Derek McManus said: “Our LiFi trial shows how you can deliver high-speed connectivity to customers in new ways and is another example of how we’re future-proofing our network as we pave the way for 5G in the UK.”

In more recent times, research company Nav Wireless Technology has taken on LiFi technology to transmit important patient data, including temperature and ventilator reading, using a wireless data transfer through LED lights. The gadget is a plug-n-play LED light with a LiFi-enabled chip within and a USB dongle that has the capacity to connect to a receiving machine. This technology can help lessen the risk of infection for medical professionals.

Other companies that have joined the LiFi bandwagon are Signify, Oledcomm, and Lucibel amongst others. The potential that comes with LiFi is clear to see so it would not be surprising if more and more companies hop on board this advancement which could revolutionize connectivity. The combination of Internet of Things (IoT) devices and Li-Fi has the promise to deliver significant opportunities to businesses across the world.

Although it’s still relatively early days in terms of the development of LiFi technology, there’s no doubt that LiFi is going to impact businesses as well as the world of internet connectivity. We will have more and more devices connected to the internet, but will WiFi technology be strong enough to handle the levels of traffic? As the demand for connectivity grows, it is likely that we will need to find a new form of wireless technology. LiFi would have the ability to merge illumination and wireless data transmission to quicken the transfer of data across different areas of the globe. According to a report released by ReportLinker, the LiFi market value is expected to reach US$3.52 billion by 2025.